NPC Friends and Family honors the life of Dr. Jon C. Graff with “Petal the Petrified” encouraging riders to stop and enjoy the gift of life 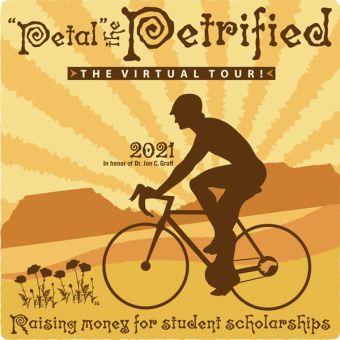 Pedal the Petrified is an annual, non-competitive bicycle tour of Petrified Forest National Park, produced by NPC Friends and Family, Northland Pioneer College’s (NPC’s) non-profit foundation. It has taken place every September since 2013 and has raised over $100,000 for NPC student scholarships.

Due to COVID, last year’s ride became a virtual event. Registrants from around the country rode their favorite routes, and posted photos of their adventures on a dedicated Facebook group page. Many of them created fund raising pages and donated to the cause. The 2020 event brought in nearly $40,000.

Plans were in place for a live 2021 ride, but the Petrified Forest is not issuing special use permits at this time, citing rising COVID numbers. Therefore, once again, NPC Friends and Family is planning a virtual ride this year, but this time, there is a special twist.

Dr. Jon C. Graff, of San Jose, California, first rode Pedal the Petrified in 2014. He reveled in the ride, and fell in love with the cause of supporting NPC students through scholarships. After 2014, his sponsorship of the ride assured that all the funds raised went to those scholarships. He even established the Jon Graff, Ph.D. Fund to provide dedicated scholarships, specifically for students who are university bound, career bound, or enrolled in remedial courses to prepare them for college-level course work.

On the corner of the Pedal the Petrified logo are the initials “JG”. NPC Friends and Family added them in 2018, the year Graff wasn’t sure he would be able to ride at all. The cancer he had fought for over six years had become very aggressive over that summer. Nevertheless, his oncologist permitted him to attempt the 50-km ride. On Saturday, September 18, 2018, Graff went on to complete the entire round-trip – all 100 kilometers. A month before, he hadn’t known whether he’d even make the trip to Arizona.

His spirit was, and is, indomitable. Since learning his prognosis was terminal, Graff began “bucket listing”, and sending his “Reports from the Field” - emails and photos of his adventures - always including at least one study of a flower, to Wilson and other close friends. He rode the ‘Going to the Sun Road,’ explored Ireland, New Zealand, New York City, and Civil War battlefields.  He danced in Luckenbach, Texas, toured the Texas Hill Country, was struck by a truck, sustained life-threatening injuries, spent nearly a month in a Texas ICU trauma center, and was miraculously back on his bike inside of six months.

Graff ended his life’s journey, peacefully and with dignity, surrounded by friends on Friday, January 29, 2021. This year’s event will be a celebration of his life and spirit.

In homage to Graff’s photos of flowers, the event is fittingly renamed for 2021 as “Petal” the Petrified. Registration for the event can be found at www.npc.edu/Pedal4Scholarships. The entry fee is $64 and includes an exclusive Petal the Petrified ride t-shirt. Registrants can choose their ride, their route, and their ride date – any time between September 1 and October 18, 2021.

Upon registration, riders will receive an invitation to the event’s Facebook group page, where they will be asked to post at least three photos of their adventure, with one being a photo illustrating the study and appreciation of a flower. Registrants do not have to have a Facebook account to participate; all registrants will receive an emailed video compilation of everyone’s adventures after October 18.  All proceeds will be added to the Jon Graff, Ph.D. Fund, which will become an endowment, assuring that his scholarships will be his lasting legacy.

A dear friend of Graff’s, Will Hoggan, so eloquently put it, “Accordingly, he was a bicycle "rider" not a bicycle "racer." However, he continues “Jon did have one significant bike race he participated in. It was the race that included only three competitors: himself, time, and cancer. The starting gun went off on April 1, 2019 when he got hit by the truck in Texas. The race he had then was to heal fast enough to get back on the bike and ride before the cancer progressed to the point he was no longer able to ride, and before the cancer killed him. To his credit, he won that race!” Hoggan reflects, “In a similar vein, each of us, cyclists or not, are in a three-participant race, with ourselves, time, and death. The prize goes to the person who can do the most good in the world before our time runs out. One of the things I admire about Jon is that he won this second race as well, by leaving a legacy that will continue doing good even though he is gone, at least from this earth.” Hogan explains, “Donating to scholarship funds is a great way to extend our legacy of doing good, whether or not our name is on an endowment or a scholarship fund.”

Since Fall 2014, NPC Friends and Family has awarded over 350 scholarships to NPC students, making a tremendous difference in their pursuit of a post-secondary education. Over 95% of awardees have either completed an NPC degree or certificate program, or are still enrolled at the college. To learn more about NPC Friends and Family, and how you can help to transform a student’s life, contact Betsyann Wilson at 928-536-6245 or betsy.wilson@npc.edu. You can also make a tax-deductible donation at www.npcfriendsfamily.org. 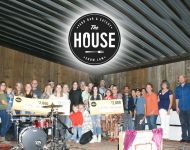 Scholarship winners honored by The House of Show Low

In 2020, Chris Corbin, owner of the popular Show Low eatery, The House restaurant, was brainstorming ... 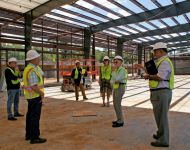 It’s been a year since Northland Pioneer College (NPC) broke ground for the new Skills Center at the ... 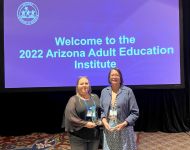 NPC educators awarded for excellence in the advocacy of lifelong learning

Northland Pioneer College (NPC) employees received topmost distinction among their peers at the 2022 ... Calling all artists in Navajo and Apache counties. You are invited to submit entries by September 30 ... 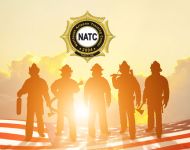 On Sunday, September 11, 2022, the white mountain community is invited to join local first ... 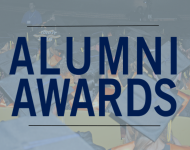 Nominate an NPC graduate for the prestigious Outstanding Alumni Award

Northland Pioneer College (NPC) encourages community participation in the nomination of a successful ...