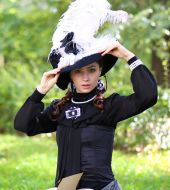 Actor/playwright Kate Hamill provides a fresh female voice in her adaptation of Austen’s novel and originated the role of Marianne in award-winning Off-Broadway performances of her play. Hamill was one of the top 20 most-produced playwrights in the country this season. NPC Performing Arts Chairman Dr. Michael Solomonson will be directing the performances. Lighting design is by Patrick Day, the PAC facilities manager.

Set in gossipy late 18th-century England, the play follows the fortunes, and misfortunes, of the Dashwood sisters – sensible Elinor, portrayed by Mary Szabo, and hypersensitive Marianne, played by Kathleen “K.J.” Palmer  – after their father’s sudden death leaves them financially destitute and socially vulnerable. “The play is full of humor, emotional depth and bold theatricality,” adds Solomonson. “Sense and Sensibility examines our reactions, both reasonable and ridiculous, to societal pressures. When reputation is everything, how do you follow your heart?”

Lindsey Owen and Heather Gardner portray Lucy and Anne Steele, respectively. Joshua Kishbaugh is in the roles of Robert Ferrars, the dead Mr. Dashwood and the doctor. Emmalee Mackay, Cruz Denetso, Mikayla Pitterle and Mitchell Armer are the other Gossips. Darion Douglas plays Thomas and a servant.

Cassie Spaulding-McDowell is the Stage Manager, with Betty Guo assisting Patrick Day as the lighting board operator.

Performances are produced through a licensing agreement with Dramatists Play Service, Inc.