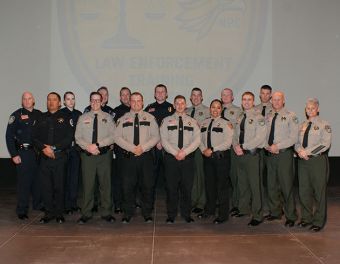 NALETA is a true partnership with regional law enforcement agencies, who assign sworn officers as instructors at no charge to the college, explained Jon Wisner, NPC’s Director of Public Safety Education. In recognition of that partnership, NPC President Mark Vest presented a bronze eagle statue to retiring Navajo County Sheriff K.C. Clark. “Without your support, and from the other local and state agencies, this law enforcement academy would not exist.”

On hand to witness the ceremony were college administrators, law enforcement representatives from throughout the region and family and friends of the recruits. Photos from the ceremony are posted online at www.npc.edu/npc-gallery.

Pipers from Timber Mesa Fire and Medical District and the Color Guard from the Navajo County Sheriff’s Office presented the colors to open the ceremony.

If you are interested in becoming a certified Arizona peace officer, “Contact the agency you would like to work for to begin the process, which can take four to eight weeks,” urged Wisner. “By recruiting and training locally, the agencies know the individual already has ties to the community, through family and housing. This has also been shown to improve the success rate for cadets.”

NALETA Class 2019-01 is scheduled to begin January 14. Centrally located at the Northeast Arizona Training Center (Jake Flake Emergency Services Institute), in Taylor, NALETA is a fully accredited AzPOST “closed” academy. This means students can only enroll under the sponsorship of a law enforcement agency.

At a minimum, a prospective recruit must be at least 21 years of age by the end of the academy; and be able to pass a variety of testing processes, which will include physical agility, firearms and written tests, background investigation and polygraph.

Further information concerning AzPOST eligibility requirements can be found online at post.az.gov then by clicking on the “Certification Process” link in the top navigation bar, or by contacting the police or sheriff’s office where you would like to begin your law enforcement career. Tribal officers, game and fish wardens and agricultural inspectors are also sworn peace officers.

Information can also be obtained by contacting Jon Wisner, NPC’s director of public safety education and NALETA director, (928) 536-6265, email, or the law enforcement training section of this website.